Know Why Laravel Is An Absolute Choice Of Entrepreneurs!

There is a proliferation of firms making lofty claims to be web developers. To put it simply, now is the moment to take advantage of them. Now the issue is how. The bottom line is that you need to choose the best PHP web development framework for your company. Be forewarned, considerable caution is required in this area.

Rather being a utility, a framework is an investment for your business. After all, this should serve as the foundation for the rest of your website. The smallest act of carelessness may result in enormous costs.

50% of PHP developers in a 2020 study reported frequent usage of the Laravel framework, whereas Symfony was reported by just 25%. Laravel is one of the most popular free open source PHP web application frameworks. It is the first and main option of a number of renowned programmers for the creation of websites and apps that are quick, resilient, and fully functioning.

Why is Laravel a good choice for entrepreneurs?

Laravel has proven to be a solid basis for the creation of scalable web applications for businesses of all sizes. Laravel provides a wide range of advantages. Let's go on a tour around the framework and stop at each of these nodes:

Today is a digital day and age. A wide range of cyber assaults have occurred in the modern era. Therefore, there has been a movement toward frameworks that provide the strongest possible app encryption.

To be specific, Laravel is the framework in question. It prevents malicious programs from functioning. More than that, it prevents any cyber danger from entering the web app, which is a good sign that the development code was safe and secure.

When working on a web application, PHP Laravel developers eliminate all possibilities of SQL injections, both intentional and accidental.

Laravel has surpassed Symfony and other frameworks in popularity, as seen by Google Trends data. Some of the world's most well-known companies utilize it to fuel their online presence.

The speed of the resulting web applications is another key reason why developers use the Laravel framework. The stress levels of developers tend to rise significantly throughout the course of creating a web app. They worry about whether or not the end consumers will like the experience.

Therefore, it is challenging for UI/UX designers to provide a really novel interaction for each user. Nonetheless, Laravel makes it simple for programmers to enhance the web app's efficiency.

3. You may construct live applications using the Laravel framework

Real-time has been a trendy term in recent years. As a result, app developers are being prompted to reevaluate their methods in light of customers' desires for more responsive apps.

Applications for social networking and audio streaming that respond to users' actions in real time are developed using the Laravel framework.

The Laravel framework provides developers with the necessary functionality thanks to its broad library, which is in high demand because of the growing need for dynamic applications.

4. Simplifies the Construction of Bilingual Software

Laravel's support for several languages is a major advantage for app development. When it comes to reaching customers in new regions and languages, Laravel is the best framework to use.

The framework makes it simple for programmers to create a web app in a non-standard language. Thus, this aids new ventures and entrepreneurs in expanding their operations internationally.

The importance of speed in online applications cannot be overstated. Laravel improves the app's speed by keeping data on the disk or in memory rather than relying on the database server.

Web applications built with Laravel can keep their performance thanks to the framework's ability to employ cache drivers, since all data saved and received is carefully structured.

6. It is free and open-source

There is no denying the fact that Laravel's robust community is a huge asset to the Laravel development team. Furthermore, Laravel is an open-source framework, so it may always be enhanced. The framework allows programmers to realize their full creative potential and create groundbreaking online applications.

Rapid application development is a pressing necessity for every company, whether it's just starting out or is already established. Many businesspeople have the foresight to realize their plans to release mobile apps at a certain point in time.

This window of opportunity is often relatively small for businesspeople to gain an advantage over their rivals. In a similar vein, the Laravel framework helps programmers speed up the time it takes to create a web project.

8. Potential to speed up their apps

Laravel, the popular web development framework, has a robust authorization system that

Laravel PHP framework set out to inspire programmers to create useful features with precision and efficiency.

In addition, it generates individual pieces of logic for each user that requests entry to the app. Since it is exceedingly challenging for developers to prevent unauthorized access to software products, the Laravel framework aids in the creation of web applications with a robust authorization function to restrict access to the application to those who have been granted permission to use it.

9. Blade Templating Functionality is Available in the Laravel Framework

Ask a PHP programmer about blade templating, and chances are good he'll recommend the Laravel framework. The Blade templating engine makes it possible for web developers to make use of a code template. It does not, however, imply that PHP programmers can return to writing the simple scripts they are used to.

They have the opportunity to provide a lightweight, dynamic, and user-friendly blade templating using the Laravel framework. Laravel's Blade templating is a core component that helps programmers create fast, lightweight web applications.

Laravel is a web development framework that follows the Model-View-Controller pattern. As a result, Laravel programmers have access to a wide range of preassembled features used in creating a web application.

Furthermore, the MVC design is hailed as the architecture with the best documentation when compared to the other PHP frameworks. The MVC design provides a clean partition between the display and business logic levels. Therefore, the Laravel framework provides advantages including improved safety, speed, and scalability.

11. The Database Migration Process Is Made Easier

Many PHP programmers worry that important data would be lost during database transfer. On the other hand, the Laravel framework makes database migration both secure and rapid. The databases for the web apps may be shared across the developers, making it easier for the teams to function as a whole.

Migration of databases wasn't implemented in the past. Some Laravel developers, however, reaped the benefits of the framework's robust community as they pondered the possibility of such a service.

As a result, Laravel developers don't have to start from scratch when creating and maintaining databases since they can simply go through the database conversion procedure.

One of the key features of the Laravel framework is effective unit testing, which is often overlooked by developers. Unit testing, for those who are unfamiliar, entails verifying the integrity of individual parts of a web project, such as modules or components.

In addition, unit testing verifies that the web applications are error-free before they are released to the public. To sum up, the web app is both stable and fast, much to the delight of its users.

You may avoid writing specialized code for common tasks by basing your web project on the Laravel framework, which provides access to a variety of pre-built file packages (including SSH, Cashier, Scheduler, and Socialite).

Laravel has a fantastic queue library, easy authentication, and great ORM. When it comes to functionality and safety, Laravel-built websites and applications are unparalleled. It will be used as a standard for years to come in terms of design and utility.

Node.Js: The Most Popular Javascript Framework You Know in 2023

Do you wonder why Node.Js is the most popular Javascript Framework you know in 2023? 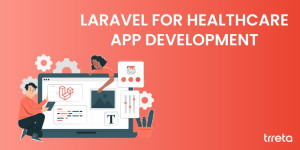 Laravel For Healthcare App Development: Why So Obvious?

If you are curious to talk to Trreta and know more about our products and services, feel free to reach out!